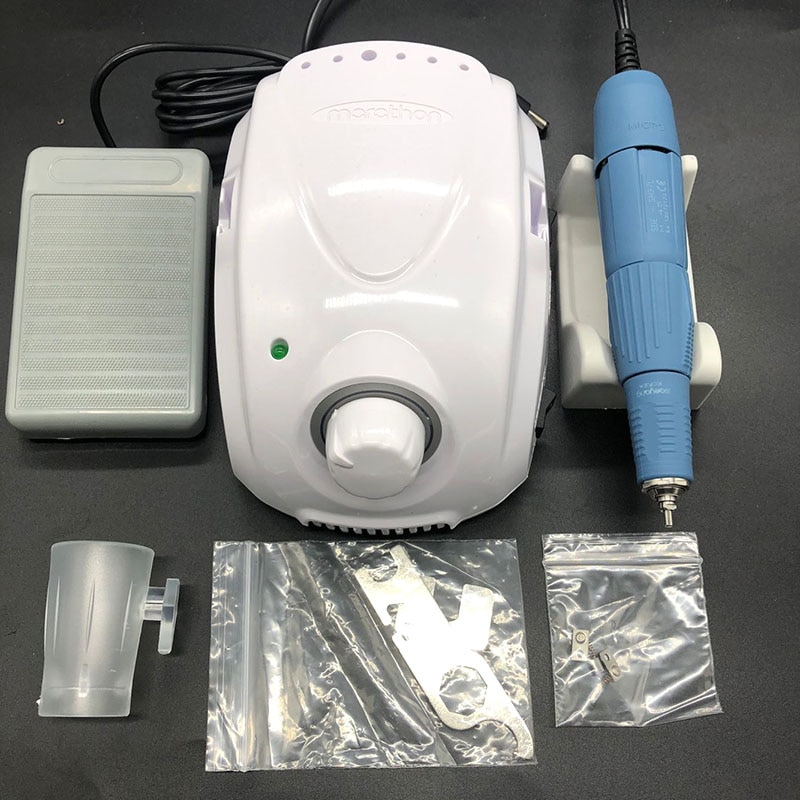 Precautions when using the Handpiece
Install the Control Unit in the room of suitable temperature(0-40C). Using it in an excessively dusty, warm or humid location damages to the Control Unit.
2. The Control Unit should rest on a flat steady place which is not disturbed by other things.
3. Never plug or unplug the Power Cord with wet hands to avoid electric shock.
4. Never use bent, asymmetrical or damaged burs. Always use standard burs.
5. Do not operate exceeding the maximum rotation speed specified by the manufacturer or distributor for the bur being used
6. Set the rotation speed of bur after refer to the allowable rotation speed chart in the User’s Manual.
7. Always thoroughly clean the Collet Chuck and a bur before reassembling.
8. Make sure to insert the bur shank all the way, until it touches the back of the Collet Chuck. Then tighten the Collet Chuck. If the bur is used while not inserted completely, it is very dangerous because it may come out by the vibration of itself.
9. After replacing a bur, it is necessary to make sure that the Collet Chuck is securely held before running the Handpiece.
?
10. While the Handpiece is running, DO NOT try to adjust the Set Ring to prevent the Control Unit from being damaged.
a
11. Before operating the Forward/Reverse Selector Switch to turn a rotating direction, it is surely required to make sure that the Micromotor has been stopped.
And
12. Take every possible care not to drop the Handpiece. It may be damaged a Ball Bearing or weaken durability of the Handpiece.
And
13. When work cutting or drilling, wear always goggles and mask
14. Always put the Handpiece of its stand while in use.
15. Only the skilled engineer is authorized to disassemble the Spindle Set and the Micromotor in order to avoid any damage to them
16. When the Handpiece is not in use, it is recommended for a test bur or a polishing point to be kept inserted into the Collet Chuck of the Handpiece.
MICROMOTOR HANDPIECE
Read this User's Manual thoroughly for safety before preparing the Control Unit for use.
Wear the safety glasses for protecting eyes.
How to operate
1. Connect the Motor Cord and Foot Pedal Cord to the Control Unit(refer to a separate sheet of Control Units).
2. After confirming the permission power of the Control Unit, plug the Power Cord into an electric outlet
3. Set the Speed Control Knob to the slowest position
4. Turn on the power of the Control Unit
5. If operate the Speed Control Knob clockwise, the rotation speed of the Micromotor increases
6. When wish to turn a rotating direction, after halt the Micromotor, operate the Forward/Reverse Selector Switch
7. When wish to regulate a rotating speed using the Foot Pedal, after operate the Hand/Foot Selector Switch as "FOOT", use 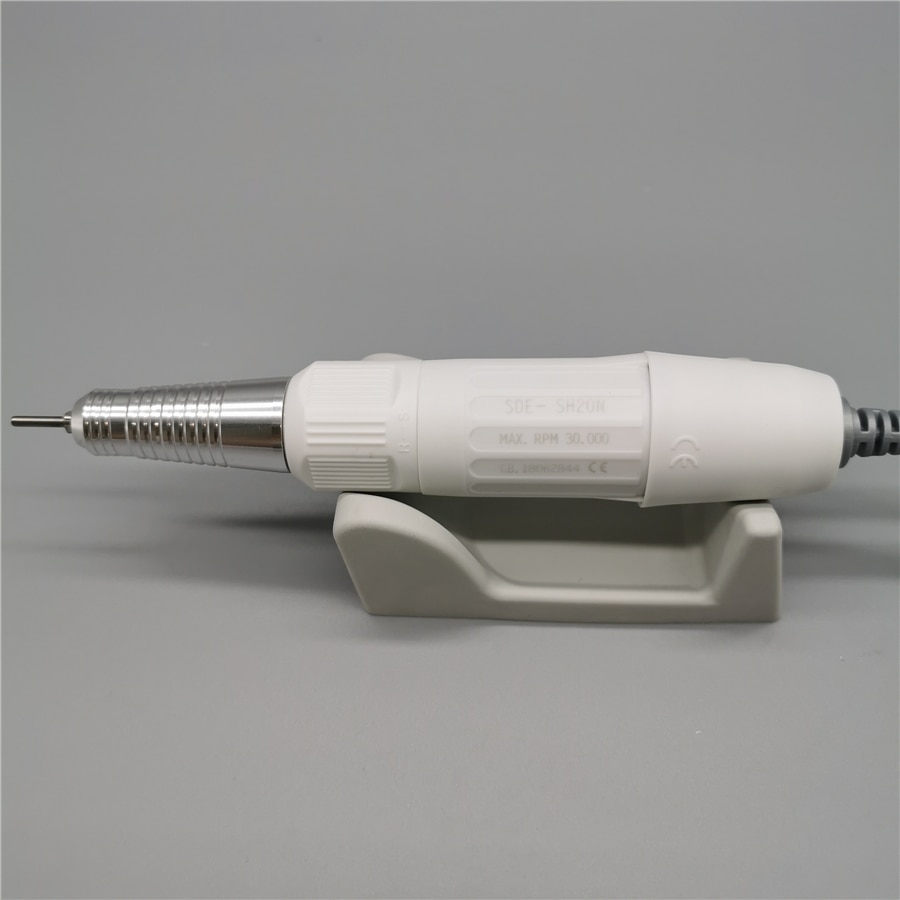 Mounting and removing a bur
1. After the turn, the Set Ring of the Handpiece for "R" direction to open the Collet Chuck, extract an old bur
2. After inserting perfectly a new bur until reach in the back of the chuck, turn the Set Ring for "S" direction to lock the Chuck
Checking items in case of not working
1.Confirm whether the power of an electric outlet is suitable in the permission power of the Control Unit
2. Confirm whether the built-in Fuse is blown.
3. Confirm whether the Power Cord, the Motor Cord, and the Foot Pedal Cord are connected correctly
4. Check that the Collet Chuck of the Handpiece is opened.
5. Confirm whether Carbon Brushes of the Micromotor are worn away since replacing the need
6. In case electron equilibration operated by overload, press the Reset Switch(some models are an exception) or restart running the Control Unit after turning off the power.

Replacing Carbon Brushes
1. After turn off the power of the Control Unit, remove the Carbon Housing Cover and the Motor Cord from the rear of the Handpiece
2. Remove worn-out Carbon Brushes after taking off Carbon Brush Bolts using a screwdriver(+)
3. Replace by new ones with observing the Brush Spring should get jammed in the Carbon Brush Holder.
4. Assemble the Handpiece
5. After running the Handpiece under no-load state about 20,000RPM for 30 minutes, then use.
※Replacing cycle of Carbon Brushes being about one year can be depending on working hours and loading conditions

Replacing the Collet Chuck
1. The Hand Cap and the Spindle Set are disjointed by continuously turning the Hand Cap counterclockwise using the Chuck Wrench.
2. The Collet Chuck is disjointed by continuously turning it counterclockwise using tools
3. After replace by new Collet Chuck, assemble the Handpiece
4. After running the Handpiece under no-load state and confirm something wrong nonexistence, then use.
* Replacing cycle of the Collet Chuck being 2-3 years, can be depending on working hours and loading conditions.

This product is under easy return policy of 15 days.